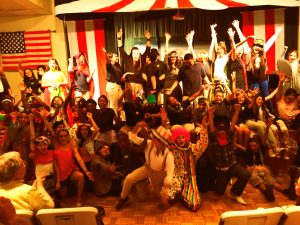 People loved the show so much we will do an encore performance in the fall.

Four weeks before the performance the show did not exist.

Elapse time from first read through to performance? 3 weeks.

IOU is a document stating what one party owes another. It may be formal, may be scribbled on a cocktail napkin or tattooed on the heart.

Whatever form it takes, an effective IOU has at least 3 important qualities.

IOUs are the difference between audience partners who can’t quit talking about an experience weeks after it’s over and listeners made of stone.

“Reading, ‘Riting & ‘Rithmetic
taught at the end of a hickory stick.”

Say what you want about its past effectiveness, this method won’t work now.

You may force people to react, but not to respect.

Respect is an IOU.

How does it work?

RESPECT – Respect is the starting point. You may not agree on every detail of life, but the two of you (and this deal is a one-on-one transaction) must agree to respect one another. We listen to one another, we acknowledge our mutual worth. There is a “leader”, but that leader must be open to the comments and ideas of others. This is not always an easy thing to do.

RELATIONSHIP – Relationship is the fuel that energizes connections between two people. Without it, we recognize each other by face and name, but relationship ends there. Other than common courtesy, we owe each other nothing. For the system to work properly, I must know at least some of your story. I let you in on at least some of mine. It’s a reciprocal deal. We both give; we both take. Eventually, we share and we care deeply. Until this bond is secure, it’s almost impossible to make progress in any meaningful way in a group effort like a choir.

REWARD – Completion of the IOU circle must benefit both parties. Example: I sweated blood and lost sleep over “Circus Sonora”. Why? Because I have an IOU agreement with my students. I give them everything I’ve got. When I’m with them, I’m with them 100% (no checking email, no working on this website). They know this is true and rely on it. For their part, they owe me. Not like a Victorian debtor, but as a matter of honor. They know how much I give. Most days, they give back the same or more (not necessarily to me personally), because we have a deal.

We respect each other.

So we work daily to keep relationship strong.

That relationship is reciprocal.

And through our “consummare” (Latin for finishing up, or completing) we both benefit.

An IOU is an inside job

You are not handed an IOU and told to pay up. You know about it beforehand and agree to it or not. The same is true with the people you serve – choir members or students or friends. It takes time and effort, but the result empowers both people; makes them eager to move on to the next deal.

It’s an inside job. It starts with you.

Parting thought. Try “The Weekly Word” for a month. It’s free. If you find it’s not for you, it’s easy to unsubscribe. No hard feelings.

Thanks for your time.