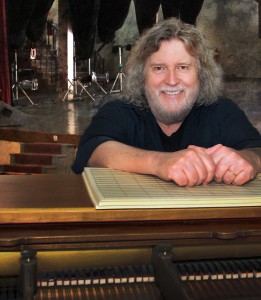 Sheldon Curry writes music, teaches kids and directs choirs. He has over 300 titles either published or recorded and that number continues to grow. He graduated from Baylor University where he studied composition and orchestration under Prix de Rome winning composer Dr. Richard Willis and cut his choral teeth under directors Euell Porter and Robert Young.

For over 30 years, in Texas, Tennessee, and Arizona, he has conducted church choirs – some in large Episcopal Cathedrals; others in rural Baptist communities. During that time, he has taught off and on – mostly poor, at-risk minority students. When it comes to worship and teaching, he has tasted just about all there is on the menu.

He has sung in countless choirs and on hundreds of recordings from Los Angeles to London with artists ranging from Amy Grant to Willie Nelson.

His songs have been in the top ten Country and Gospel charts for Billboard magazine. He penned the highest selling church anthem ever for Hal Leonard Publishing (Down to the River to Pray from the movie “O Brother, Where Art Thou”). As a record producer, he has two Grammy nominations.

He held leadership publishing positions for WORD Music, Lorenz Publishing, and Alfred Music. Choral Reading Clinic attendees all over the country have laughed at his wry humor and learned from his tales of front-line trench scars and experience.

On a more personal note:

“He” is me … and after the bio stuff I am supposed to tell you on an ABOUT page, let me add that I’ve done nothing alone. I have been lucky enough to have learned from masters like Kurt Kaiser, Charles F. Brown, Peter and Lois Fyfe, Jean Anne Shafferman and Tom Fettke. I’ve got dear, forgiving friends like Robert Sterling and Mark Hayes. They were and are mercifully patient with me and I owe each of them more than I can ever repay.

Currently, my wife and I live in Tucson, Arizona. I am honored to teach at Imago Dei Middle School and am Director of Music at St. Andrew’s Episcopal Church, Nogales, ArizonaSt. Andrew’s, Nogales.

I love everything about horses except vet & feed bills.

I teach. I serve. I love. Which brings me to the truth about this site.

It’s yours, not mine.